In this guide, we will see git basic commands, and fundamentals of git.

Lets first take a look at the different stages in git.

There are four different areas in lifecycle of our code in git. 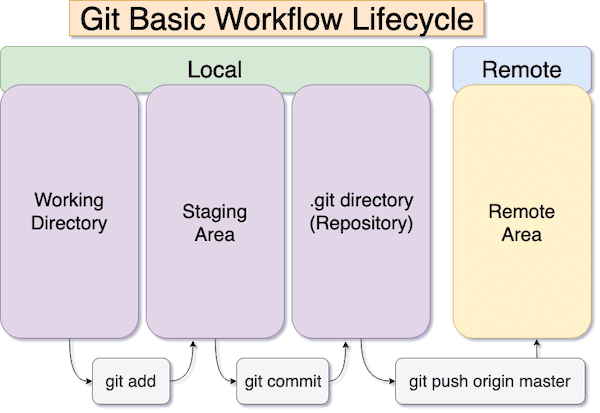 Workflow-1, Get the code from Github

To get the code or project from Github, goto your project link in Github. Copy the git path, as shown in image:

It should create a folder with your project name in the current folder. Lets go inside that folder.

Git ls-files
It lists all files tracked by git.

Command git status tells you the status of your files. It tells in which branch I’m currently. It also tells which are the files which are unstaged.

Add a file to staging area
Lets create a test file in the project folder. And, see its status.

The files you just added will be treated as Untracked files. To add this file to staging area, run command:

Add file to repository area (Just before going live)
Now our file is in staging area. Lets promote it to next level by committing it.

You should specify very nice commit message. This will help you and your team in future about why this commit happened.

You can verify this file by going to your github url in browser.

Note, git status shows you the command to revert from stage. There are actually two ways to do this:

Both does the same job. Your local file will still has the changes.

Revert local file changes and make it similar to what is live
You have done some changes to files. And, now want to revert that changes so that it become exactly same as what is at github.

Method-1
use git command to rename file. (Not through system command)

You don’t need to rename file on disk. Git command will do it for you.

Method-2
Rename it via system command.

In this case, git sees this as two separate operations. Delete and add the file. Lets see the magical command.

It recursively add new changes. It will also check if any file has been added, renamed, moved, deleted.

Now, you can commit the changes by git commit, git push commands.

Reverting file rename
There is a simpler way to do this apart from git reset. Just do:

If you do an ls, you will not find that file in local folder. In git status, you will see that git has staged this change. But the change has not been committed and pushed yet.

It detects the change, that this is not staged. To add this in stage area:

How to revert deleted file from stage area back to local area
After marking a file for deletion, it will not be visible from local folder. You may want to bring it back from staging area.

Note, you need to type the filename correctly. Since, it is not in your local folder. And, even after running above command, if you see the file is not in your folder yet.

Finally, to bring it back.

So, to save from these scenarios. There is a special file called .gitignore

Create this file under your project folder, and you can use file/folder name, pattern. Once you save this file, git will never commit those matched files and folders.

It is important to note that you need to commit this file in git.

Assuming your web application is using oracle, and you are deploying your app on…

ReactJS - Understanding SetState Asynchronous Behavior and How to correctly use it

Drupal 7&#58; How to save a node programmatically and add an image field from a public URL

Note: I have public URLs of these images, which I want to save. return…

Kubernetes - How to Solve Gateway Timeout with Http Statuscode Error 504

Introduction You have a running kubernetes setup, and have a webservice (exposed…

You have drupal 7 image from docker hub, and want to connect tomongo db via php…

How to get all image tags from an html - php code

I wanted to fetch all image tags from a big html, and wanted to perform some…

Introduction In this post we will see following: How to schedule a job on cron…

How to Git Clone Another Repository from Jenkin Pipeline in Jenkinsfile

Introduction There are some cases, where I need another git repository while…

Introduction In this post, we will see how to fetch multiple credentials and…

Introduction I had to write a CICD system for one of our project. I had to…